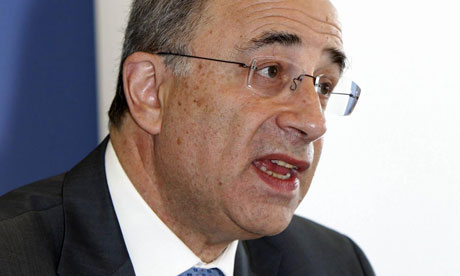 Lord Justice Leveson's inquiry into phone hacking is to be briefed by experts as it develops a new model for press regulation. Photograph: Sean Dempsey/PA
Two experts on banking and financial services law have been invited to make presentations to the Leveson inquiry as part of its bid to come up with a new model for press regulation in the wake of the phone-hacking scandal.
Donald Macrae, a lawyer and consultant advising governments across the world, is one of six experts who will attend a teaching session on 5 October at the Royal Courts of Justice.


Macrae, who acted as a government lawyer across nine ministries until 2007 is currently advising the World Bank on projects in Azerbaijan, Kyrgystan and Mongolia.

He is one of six experts to present evidence to one of the three teaching sessions being organised before the Leveson inquiry launches in October.
A seminar covering the technicalities of phone hacking was held last Monday in private. A second briefing will take place on 28 September when the inquiry will hear from Mark Warby QC, a leading silk in media, entertainment and regulatory law.


The third teaching session, at which Macrae will speak, will be on 5 October, and will look at regulatory systems and models in different sectors and different countries.

Also speaking at this seminar will be Ofcom chief executive Ed Richards; David Smith, deputy commissioner and director of data protection at the Information Commission; Guy Parker, the chief executive of the Advertising Standards Authority; Ian Woodman, a manager at the Financial Ombudsman Service; and Mark Thompson, consultant and editor of the Open Society Institute website mediapolicy.org.
The inquiry has also announced it will hold a second preliminary hearing at the Royal Courts of Justice on 4 October. The first hearing established who would be "core participants" at the inquiry.
http://www.guardian.co.uk/media/2011/sep/26/leveson-inquiry-experts
Posted by SteelMagnolia at 11:06 PM