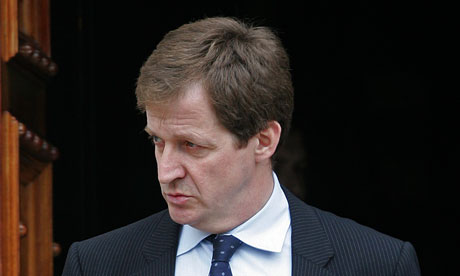 Alastair Campbell is on of the public figures believed to have been targeted by Jonathan Rees. Photograph: Toby Melville/Reuters
Years ago, Jonathan Rees became a freemason. According to journalists and investigators who worked with him, he then exploited his link with the lodges to meet masonic police officers who illegally sold him information which he peddled to Fleet Street.
As one of Britain's most prolific merchants of secrets, Rees expanded his network of sources by recruiting as his business partner Sid Fillery, a detective sergeant from the Metropolitan Police. Fillery added more officers to their network. Rees also boasted of recruiting corrupt Customs officers, a corrupt VAT inspector and two corrupt bank employees.

Other police contacts are said to have been blackmailed into providing confidential information. One of Rees's former associates claims that Rees had compromising photographs of serving officers, including one who was caught in a drunken state with a couple of prostitutes and with a toilet seat around his neck.

It is this network of corruption which lies at the heart of yesterday's claim in the House of Commons by Labour MP Tom Watson that Rees was targeting politicians, members of the royal family and even terrorist informers on behalf of Rupert Murdoch's News International. The Guardian's own inquiries suggest that Watson knows what he is talking about.
Much of what the police sources were able to sell to Rees was directly related to crime. But Rees also bought and sold confidential data on anybody who was of interest to his Fleet Street clients, to which the police often had special access. The Guardian has confirmed that Rees reinforced his official contacts with two specialist 'blaggers' who would telephone the Inland Revenue, the DVLA, banks and phone companies and trick them into handing over private data.
One of the blaggers who regularly worked for him, John Gunning, was responsible for obtaining details of bank accounts belonging to Prince Edward and the Countess of Wessex, which were then sold to the Sunday Mirror. Gunning was later convicted of illegally obtaining confidential data from British Telecom. Rees also obtained details of accounts at Coutts Bank belonging to the Duke and Duchess of Kent. The bank accounts of Sarah Ferguson, Duchess of York, are also thought to have been compromised.


The Guardian has been told that Rees spoke openly about obtaining confidential data belonging to senior politicians and recorded their names in his paperwork. One source close to Rees claims that apart from Tony Blair, Jack Straw, Peter Mandelson and Alastair Campbell, he also targeted Gaynor Regan, who became the second wife of the former foreign secretary Robin Cook; the former shadow home secretary Sir Gerald Kaufman; and the former Tory cabinet minister David Mellor.
It is not yet known precisely what Rees was doing to obtain information on these political targets, although in the case of Mandelson it appears that Rees acquired confidential details of two bank accounts he held at Coutts, and his building society account at Britannia. Rees is also said to have targeted the bank accounts of members of Mandelson's family.


An investigator who worked for Rees claims he was also occasionally commissioning burglaries of public figures to steal material for newspapers. Southern Investigations has previously been implicated in handling paperwork that was stolen by a professional burglar from the safe of Paddy Ashdown's lawyer, when Ashdown was leader of the Liberal Democrats. The paperwork, which was eventually obtained by the News of the World, recorded Ashdown discussing his fears that newspapers might expose an affair with his secretary.
Computer hacking


The successful hacking of a computer belonging to the former British intelligence officer Ian Hurst was achieved in July 2006 by sending Hurst an email containing a Trojan programme which copied Hurst's emails and relayed them back to the hacker. This included messages he had exchanged with at least two agents who informed on the Provisional IRA — Freddie Scappaticci, codenamed Stakeknife; and a second informant known as Kevin Fulton. Both men were regarded as high-risk targets for assassination. Hurst was one of the very few people who knew their whereabouts. The hacker cannot be named for legal reasons.
There would be further security concern if evidence finally confirms strong claims by those close to Rees that he claimed to have targeted the then Metropolitan Police Commissioner, Sir John [now Lord] Stevens, who would have had regular access to highly sensitive intelligence. Sir John's successor, Sir Ian Blair, is believed to have been targeted by the News of the World's full-time investigator, Glenn Mulcaire. Assistant commissioner John Yates was targeted by Rees when Yates was running inquiries into police corruption in the late 1990s. It appears that Yates did not realise that he himself had been a target when he was responsible for the policing of the phone-hacking affair between July 2009 and January 2011.

Targeting the Bank of England, Rees is believed to have earned thousands of pounds by penetrating the past or present mortgage accounts of the then governor, Eddie George; his deputy, Mervyn King, who is now governor; and half-a-dozen other members of the Monetary Policy Committee.

Rees carried out his trade for years. His career as a pedlar of privacy stretches back into the 1990s, when he worked assiduously for the Daily Mirror, the Sunday Mirror and the News of the World.

Rees and Fillery had three key media contacts, some of whose conversations with them were recorded by a police bug in their south London office: Doug Kempster from the Sunday Mirror, who was recorded suggesting that "Asians look better dead"; Gary Jones from the Daily Mirror, who was recorded as Rees told him that some of what he was doing for the Mirror was illegal; and Alex Marunchak, the executive editor of the News of the World.

This lucrative career was crudely interrupted in September 1999 when Rees was arrested and then jailed for plotting to plant cocaine on a woman so that her ex-husband would get custody of her children. Sid Fillery similarly ran into trouble with the long of the arm of the law which he was so keen to twist. He was arrested, convicted for possession of indecent images of children and retreated to Norfolk to run a pub. Rees, however, emerged from prison in May 2004 and proceeded to carry on trading, this time exclusively for the News of the World, then being edited by Andy Coulson, who went on to become David Cameron's media adviser.
The scale and seriousness of Rees's activities have worrying implications for Operation Weeting, the Scotland Yard inquiry which finally — unlike its two predecessors — is making a robust attempt to get to the truth of the scandal. Weeting has been told to focus on one private investigator, Glenn Mulcaire; on one illegal technique, phone-hacking; which he deployed for the one
newspaper which paid him on a full-time contract, the News of the World. That alone is consuming the full-time efforts of 45 officers.


The truth is that Mulcaire was only one of a dozen different investigators, many of whom used other illegal techniques. And the News of the World, as journalists all over Fleet Street know, was not the only enthusiastic employer of these dark arts. Mulcaire and his phone-hacking became the single focus through the simple fluke that he was clumsy enough to get caught interfering with the voicemail of the royal household — the one target which would finally move the police into taking on a Fleet Street paper. The police famously failed to look beyond him, and it is only now that the rest of the truth is beginning to emerge.
With the new disclosures of Rees's operation there will be pressure on Weeting to expand its inquiry, which would involve recruiting still more officers. And, in the background, there is a small queue of other investigators waiting to have their names — along with their Fleet Street clients — added to Weeting's list of suspects. High among them will be a former Metropolitan police detective who was accused of corruption in the early 1980s and forced out of his job after a disciplinary hearing.
Senior Yard sources say this detective then came up with a novel form of revenge. He acquired a press card and proceeded to act as a link between Fleet Street crime correspondents and the network of corrupt detectives he knew so well.


Former crime reporters from several national newspapers have told the Guardian that they used this detective to carry cash bribes — thousands of pounds in brown envelopes — to serving officers. Scotland Yard for years has been aware of his activity and has attempted but failed to catch him and stop him.
The crime reporters say that one reason for the Yard's failure is that, when the Yard tried to stop the corruption, serving officers tipped them off so they could evade detection.


And there is more. The Guardian has identified a total of eleven specialist 'blaggers' who were paid by wealthy clients, including Fleet Street newspapers, to steal medical records, bank statements, itemised phone bills, tax files and anything else that was both confidential and newsworthy.
• This article was amended on 9 June 2011. The original referred to the then Metropolitan Police Commissioner, Sir John Stephens. This has been corrected.
http://www.guardian.co.uk/media/2011/jun/08/phone-hacking-scandal-jonathan-rees
http://themurdochempireanditsnestofvipers.blogspot.com/2011/07/murdoch-and-overlooked-panorama-scoop.html

http://www.guardian.co.uk/politics/2010/feb/04/david-cameron-freemasons-westminster
Cameron and the FREEMASONS
Posted by SteelMagnolia at 6:07 AM