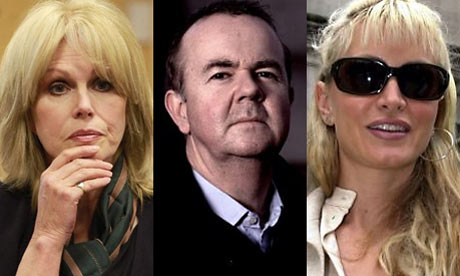 Joanna Lumley, Ian Hislop and Caprice Bourret: among those of interest to investigators. Photograph: Getty Images/Channel 4/Rex Features
From his cramped office at the back of his family home on a quiet street on the Hampshire coast, Steve Whittamore was for years the link between news organisations and a network of sources who could penetrate the security of confidential databases.
Eastwards, on the Sussex coast, he paid a long-haired Hells Angel who had perfected a spiel that allowed him to phone up British Telecom to extract home addresses and ex-directory numbers. To his north, in Salisbury, he used a fellow private investigator who worked on mobile phone companies as well. To the west, in Devon, a civil servant in the Department for Work and Pensions had access to the giant database of the social security system. Inside a regional office of the DVLA, he had two men who sold him the private details of any registered car owner. At Wandsworth police station in south London, a civilian worker sold criminal records and other personal information from the Police National Computer.....read more
http://t.co/ktv8yxC
Posted by SteelMagnolia at 10:00 AM